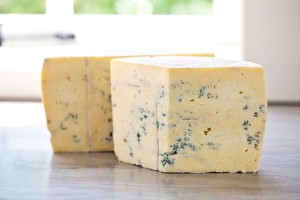 Roquefort cheese come from Rouguefort town in France where one of the best Blue Cheeses are made (The cheese Penicillium Roqueforti is named after a town too). There are caves full of Penicillium mold spores growing naturally.

History of the Blue cheese
Like most of all wonderful creations, it was created by accident. Blue Cheese is called to be a creation of nature – cheese makers stored their cheeses to age in the caves there Penicillium Roqueforti and Penicillium Glaucum fungi were discovered. Cheese makers noticed the mold and the spores were incorporated into the cheeses and they give a special taste for a cheese. That is how we have blue cheese, which is popular all over the world.

How to make a Blue cheese

There is an old tradition how to make Blue Cheese. And the whole process has six standard stages. At first cheese makers left old loaves of rye bread in the damp, cool caves. The loaves become hosts and the mold grows on the bread. After about a month it is picked, dried, grounded and mixed with the cheese curd. Two most widely used molds are called Penicillium Roqueforti and Penicillium Glaucum. To make cheese more flavourish the entire wheel of cheese is aged inside the cave. These modern days manufactured freeze-dried Penicillium Roqueforti mold is usually used. The second step is called needling. The wheels of cheese are pierced with many tiny holes to create tiny openings. The air feeds the mold and makes the blue/green mold veins.

More about Blue cheese
Although the technique is quite strict there are many factors which affects the flavor of Blue Cheese – the most important of all is the type of milk.