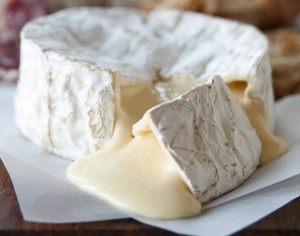 Description of Camembert cheese
The Camembert town was famous for its cheeses since 1680. But in 1971, in the middle of the French Revolution, a French farmer Marie Harel made a new form delicious cheese, which later was named after the town she lived in – Camembert. Some say that she just improved the recipe given to her by a local priest, but anyway now Camembert cheese is said to be the most famous and popular French cheese all over the world.

The history of Camembert cheese
In the end of XIX th century the Camembert cheese was spread in France and exported all over in Europe. These days various countries such as Italy, Switzerland, Japan, USA, Brazil produces their own “Camembert”, but the real “Camembert de Normandie”is widely exported.

Talking about Camembert cheese it is important to mention that the real one is famous for its light yellow colour, which is because of the milk of the Normandy region. Other types of milk do not give this “effect”. But in 1909 the cheese makers from Camembert decided to create the “Syndicat des Fabricants du Véritable Camembert de Normandie” (Genuine Camembert of Normandy Makers Syndicate) to protect the original flavour and fame of the Camembert. The cheese was given a French quality label in 1968 “Label Rouge” and in 1983 this cheese received a special brand and recommendation from French government, called “Appellation d’Origine Controlée” (AOC).

More about Camembert cheese and expanding
First robot camembert factories were built after the first world war, and only from the early XX th century the rind has become commonly white, when scientists learned more about fungi. Before it was more a matter of chance.

The famous wooden Camembert box was created in 1890 by engineer Ridel to make the transport of the cheese easier and send it for longer distances.