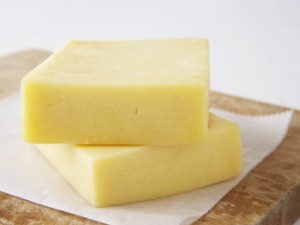 Description of Cheddar cheese
Cheddar is the cheese from cow’s milk and has semi-hard consistence. This cheese is well known in the world is used in many different recipes and has many regional versions especially in Great Britain and former colonies.

History of Cheddar cheese
Cheddar cheese was first made in a village of Cheddar in southwest England in the XIIth century. This cheese has a wide variety of flavours, depending on preparation processes and how long it is aged. The colour of the cheese (orange) is very important too. It depends from the milk, but some makers even put some dyes to make it more intense. Its natural colour is a creamy to pale white, but orange cheese has become more popular. Young cheese is more mild, longer aged cheese has a more sharp, complex flavour. The cheese can be aged from 3 to 30 months.

How to make a Cheddar cheese?
At first curd is made from milk. The curd is drained and the next step is called cheddaring. After cheddaring curds are cut, salted, and packed into molds with a bacteria to age. As the other named cheeses Cheddar is also protected and labelled after the “West Country Farmhouse Cheddar” Appellation certification.

More about Cheddar cheese
Its flavour can vary from mild to extra sharp. There are several things that could change the flavour of cheddar. The first is a fermentation bacteria which affects the level of moisture and unique texture. The cheese varies widely in quality and is available in most of the markets.