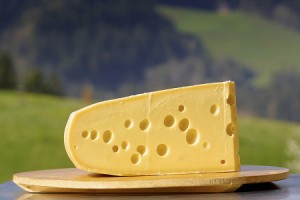 Emmental is original Swiss raw cow‘s milk cheese. It has a creamy colour, nutty flavour and large holes. It is originated in Switzerland, in the region of Bern, in the Emme Valley, but it is widely duplicated around the world. “Emmentaler Swiss” cheese is labelled by an Appellation of Controlled Origin. This label means that only the cheese, which is made in the Emme Valley in a certain way can carry this name.

How to make Emmental cheese?
Emmental has its traditional fashion of preparing – the milk for this cheese comes from pasture fed cows, usually with high butterfat content. The milk is heated then inoculated with bacteria, curdled, and pressed into very large cheese wheels, then aged from four months to a year before using. One cheese wheel can weigh up to 90 kilos. The bacteria inside the cheese generates carbon dioxide, this forms its large holes.

More about Emmental cheese
This cheese melts very well and is used in a many different recipes, which include cheese – from quiche to a cheeseburger. It can also be sliced and eaten plain.