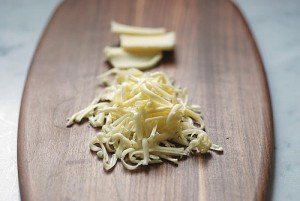 History of Monterey Jack cheese
There are a few legends of this cheese. One story tells that around the middle of XIXth century David Jack has invested his money in one of the local dairies and to make use of milk he started making a simple cheese based on the one the Franciscans were making. The difference was, he used the press to expunge it and form a brick. Manufacturers still argues who manufactured and marketed Monterey Jack cheese first. It is known that in the 1700s Monterey Jack cheese was brought from Spain by Franciscan Monks. Most probably to Spain it came from Italy. Despite the fact that Monterey cheese was inspired by European cheeses it can be called “American”, because it was developed in the United States.

How tastes Monterey Jack cheese?
Monterey reminds a bit of Italian cheeses or cheddar (the manufacturing process is similar, although without dye), it has creamy, mild flavour and a high moisture content. An aged version of this cheese is called Dry Jack and reminds a bit of Parmesan. It has a sharp flavour and is hard enough to be used like Parmesan.