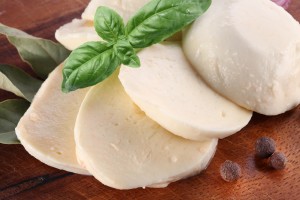 History of Mozzarella Cheese
The History of Mozzarella Cheese reaches the times of Julius Caesar. The counsel of Caesar Anthony was sent to Egypt to administer the conquest. And, the legend says that Anthony and Cleopatra fell in love and spent many beautiful hours together. In one of their cruises in Nile they were eating cheese made from the milk of the water buffalo. Anthony loved that cheese and sent one water buffalo to Rome as a gift to Caesar with a recipe of that special cheese. At once mozzarella became famous in Southern Italy. The production of this cheese was developed by Italians and cannot be beaten.

How to make a Mozzarella cheese?

The curds are heated in water until they form strings and become elastic. Then they are stretched, kneaded until smooth, and then formed into round balls. The process is called pasta filata.

Mozzarella is said to be at its best when eaten within hours of its making. There are many Mozzarella cheese recipes, but the most popular is with fresh tomatoes and basil.