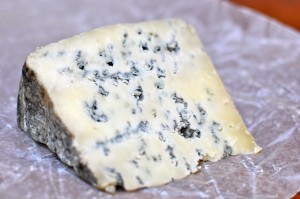 Roquefort cheese is one of classic blue cheeses from the south of France. It is one of the oldest cheeses and now considered one of the greatest cheeses of France. Roquefort is protected by French law (by AOC only cheese from the Roquefort-sur-Soulzon region can be called Roquefort cheese) other French blue-veined cheeses are called “bleu” cheese. Roquefort was the favourite cheese of the emperor Charlemagne and he called it “the cheese of kings and popes”.

How to make Roquefort cheese
Roquefort is made from sheep’s milk with special blue mould. It breaks easily into little pieces. The cheese is pressed in big wheels (around 2.5 kilograms, 18 cm diameter, 10 cm thick). Best Roquefort is ripen about five months (from April to October) and aged in the limestone caves of Roquefort near Toulouse in southern France where the mold Penicillium roqueforti grows. Gorgonzola is very similar cheese to Roquefort, but it is made from the milk of cows.

The piece of cheese is wrapped in foil and labelled with the sign of red sheep. Ideal accompaniment for Roquefort is red wine.